This rugged dual chain bracelet features a knotwork wolf’s head clasp and is forged in steel.

In Norse myth, wolves are symbols of power: legend claims that two wolves perhaps symbolizing darkness or chaos, Hati and Sköll, will chase the sun and moon eternally, until Ragnarök — when their father Fenrir, the wolf son of Loki, will battle Odin.

As is recounted in the tale The Binding of Fenrir, the Aesir gods raised Fenrir themselves in order to keep him under their control and prevent him from wreaking havoc throughout the Nine Worlds.

He grew at an astonishingly fast pace, however, and eventually, the troubled gods decided to chain him up. Their first two attempts were unsuccessful; while the cunning gods convinced Fenrir that it was only a game, a test of his strength, he broke through the fetters easily.

A
Allen Heathcote
love it and haven't taken it off since. al...

love it and haven't taken it off since. also came in a nice wooden box with Vikings engraved in it's lid. I'd buy this bracelet again in a heartbeat, that is if I ever need a replacement or a great gift. 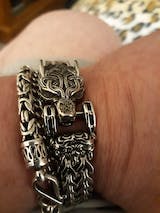 A
Adam Kihn
This is a great piece, fit my wrist perfec...

This is a great piece, fit my wrist perfectly with the larger size and the seller was prompt with both communication and shipping! 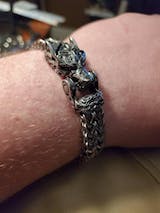 Beautiful piece of art for my husbands wrist. He loves it. Has not taken it off since the day it arrived.